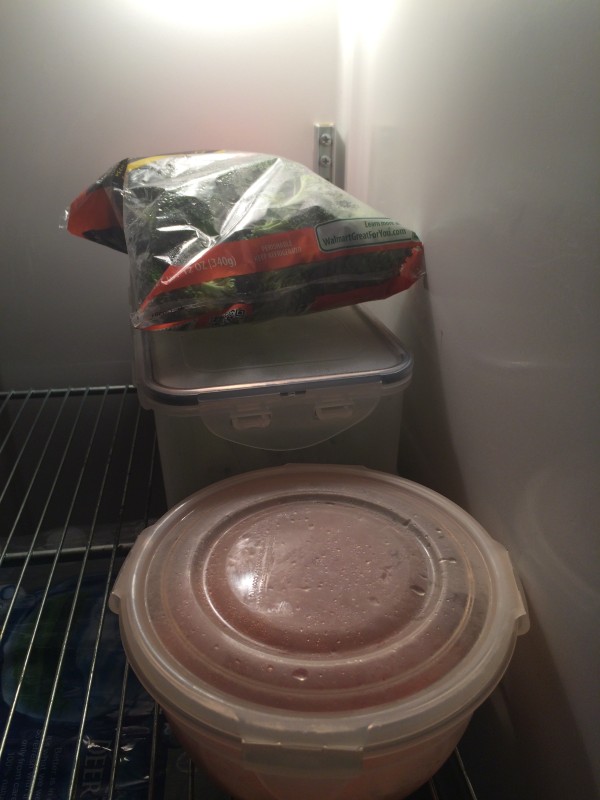 While healthy foods are a huge part of my fitness plan, the most important is a collection of Rubbermaid containers near the fridge.

It doesn’t take a rocket scientist to figure out if those raw veggies aren’t there when hunger strikes then you will be forced to visit the grocery store (or go hungry).  And trust me it’s very difficult to choose a healthier (and possibly more expensive) snack as opposed to a cheap unhealthy one in that moment

I learned this lesson the hard way while tutoring english students three times a week at a YMCA less than five minutes from Wal-Mart. At the end of almost every class around 10:30 my customary snack run to Wal-Mart took place.

I rationalized this by point out the snacks cost less than $2, but the physical toll they took on me was much worse [1].

In the past my response would be to just eliminate the mid-morning snack altogether. However this isn’t good because that leads to eating way too much for lunch, and it’s believed that six small meals a day (eating every two to three hours) is best at keeping the weight off.

So now a stack of Rubbermaid containers filled with healthy snacks (mostly fruits and veggies) goes with me everywhere.

This way after tutoring children at 10:00 I can snack on pieces of carrot or celery from a container that’s riding shotgun in the truck. And at the 3:00 there’s a container of nuts or sliced apples beside the desk.

Allow me to explain;

A small bag of carrots will usually cost about $2.50 (a package of celery or large bag of radishes will cost the same). My normal post class snack of two Wal-Mart donuts will cost $1.20.

Heres the thing…A bag of carrots kept in an air-tight container will last about ten days. Those two donuts will last a half-hour if I’m lucky 🙂

Add to this the fact that eating raw vegetables will make you feel full faster and longer [2] than empty carbs. So five to eight carrots will fuel me a lot better than those creme filled donuts.

So let’s break it down shall we?

Two donuts give one snack

None of this will matter though without a system of healthy snacks in place. There weren’t too many containers in my fridge this morning, but usually on Mondays it has five ready to be grabbed as I run out the door.

My point is it isn’t enough to just realize the importance of healthy snacks. It’s necessary for us to set up a system so they are readily accessible in a moment of hunger. Doing this is a pain sometimes, but it saves us money as well as guilt 🙂